Home Lifestyle A night in with the Don
Lifestyle

A night in with the Don

Something that I don’t do too often is drink alcohol, I think I grew out of it as I reached my late twenties. Perhaps I’m just becoming boring, but as my hangovers started dragging later into the Sunday evening I just called it quits and stopped going out. Replacing my Saturday night drinking sessions with Saturday night gym sessions.

Saying that I guess I haven’t completely stopped drinking and do enjoy the occasional beer when watching football, but my binge drinking student style nights out are long gone.

When I was a big drinker my staple spirit of choice was always Vodka and only vodka, no JD’s, Morgans or any other alternatives. Just Vodka.

I was approached and asked whether I would like to try out a rum, which being honest isn’t something that I’ve ever had much experience in drinking other than about a two week period of drinking Kraken and cola. It didn’t last.

When I was asked to try out Don Papa rum, I wasn’t too sure if it was something I would be keen on, but due to my recent spurt of drinking again with the two stag weekends in the past month, a little more booze couldn’t hurt.

The don arrived and it’s such a stunning little bottle with a proper cork stopper. Not something you see too often or at least not from my vodka drinking background. 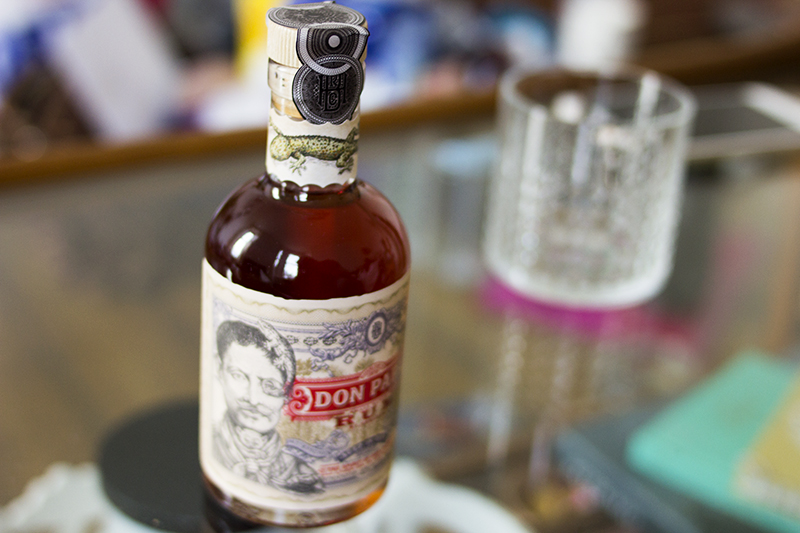 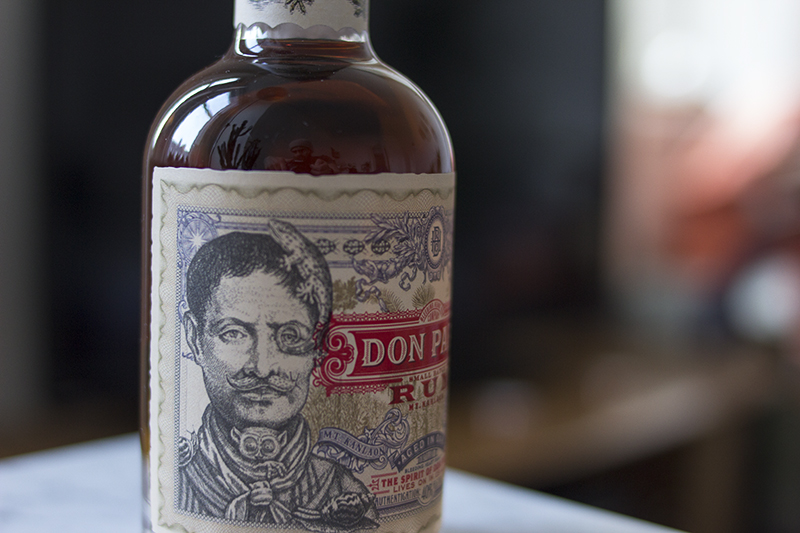 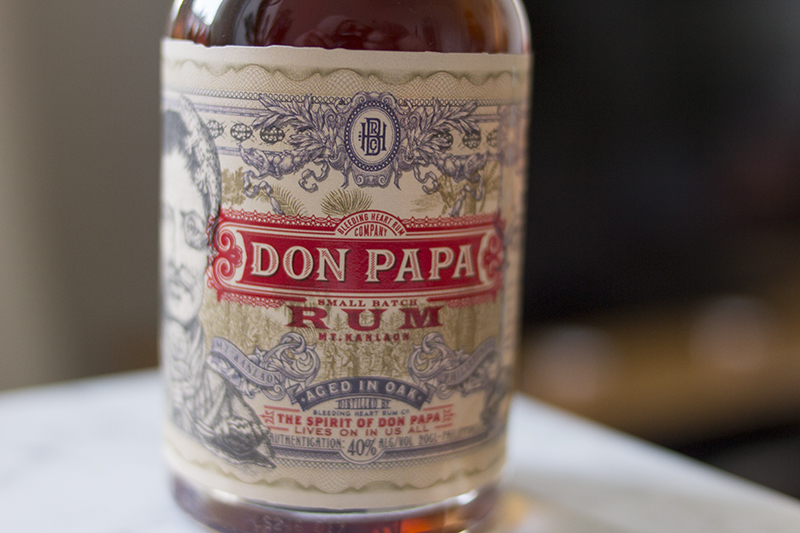 The label is beautifully intricate and features a gentleman who is wearing what appears to be a monocle, but turns out to be the tail of a chameleon. Later I found out that there are actually 50 animals hiding in the label and I will make sure that I find as many as possible now.

To give Don Papa a run out, we decided to have a tex mex/mexican night and picked up some grub from Muchacho in town. 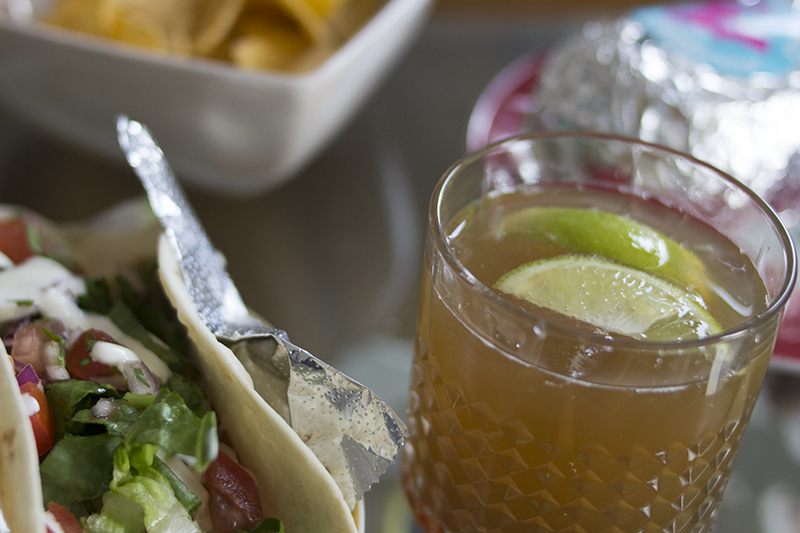 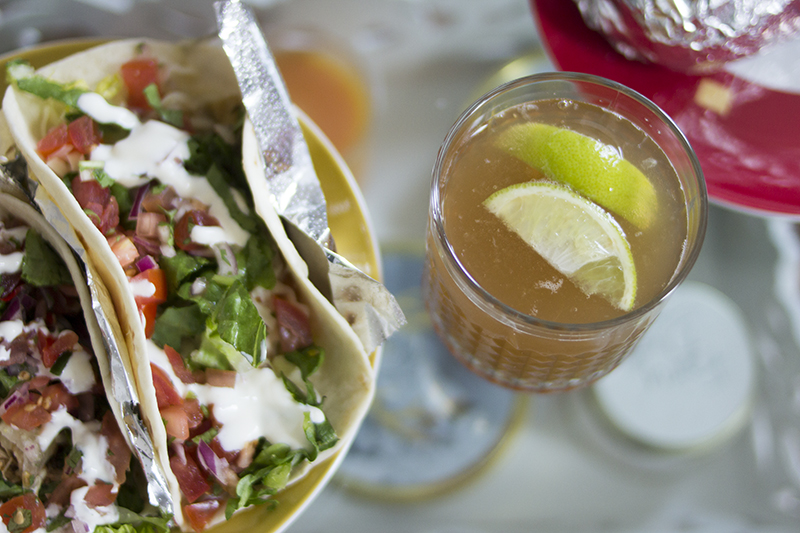 Lauren had tried an amazing rum cocktail recently called “Dark & Stormy” so we recreated that using Don Papa which is as follows:

As I said before I was always a vodka drinker, but this cocktail was beautiful. The flavours combine to create a drink that you sip on rather than down meaning that you actually enjoy it as a drink instead of just drinking it for the sake of getting drunk.

The rum itself has a sweet taste and gives off hints of vanilla.

I did try the drink neat, but I’ve never been good at shots and straight alcohol is sometimes a bit much for me, so it wasn’t something I enjoyed too much.

Nevertheless, I can see myself becoming a more appreciative drinker by creating drinks that I enjoy sipping on and having a night in watching a film rather than throwing vodka & lemonades down my throat as quick as possible before hitting town.

I am most definitely a grown up now.

How are you spending your May day weekend or are you one of the unfortunate folks that have to work?

* I was sent this bottle to review, but the opinions in this post are my own.

One for us bearded blokes

As an occasional drinker and big fan of rum, I adore this post. I haven’t heard of this particular brand before so will be checking it out! Lisa http://www.thirtysomethingbelle.com

Thanks Lisa. It’s totally worth checking out. I’m not a rum drinker at all, but really enjoyed this one. Let me know if you get your hands on a bottle and what you think of it.

Where abouts did you get the bottle from Peter? I’ve recently aquired a taste for Rum and Whiskey

I got this sent to me by a PR company, but I believe that they are being sold in Majestic and Harvey Nichols. You should be able to pick up a bottle online somewhere I would believe.

I am not a big rum drinker myself I much prefer whiskey but I absolutely love the design of this bottle, I definitely wouldn’t mind giving it a try sometime.

I found you via #beechat this evening so I thought I’d come over and check you out!! I love a good Rum, I was introduced to it in Australia when I tried ‘home-brewed’ Rum and it was amazing…..once tasted never forgotten!!!! >.<
I now like tasting different alcohol which I wouldn't have liked before tasting Rum……maybe there's something to be said for Rum! Loved this Post Peter and your Blog in general! I hope to be back reading more sometime soon!!
Sarah
xoxo

Thanks Sarah. This is definitely a rum that you should try if you’re a lover of rum.
Look forward to having you back. I’ll be posting pretty regularly if time permits. 🙂